Having just returned from 3 weeks sailing 1,200 nautical miles across the Banda Sea in eastern Indonesia on the beautiful yacht Amandira from Sumbawa (near Bali) to Sorong in West Papua, it’s time to share some stories and images of the adventure.  I’ll split this blog into a couple of sections; I’ll start with Life & The People, and follow with The Oceans & the Islands in a couple of weeks.

Most of our time when we weren’t sailing (to be fair, that wasn’t often!) was spent diving, which was the primary reason for the expedition. However, we did make time to visit some of the more remote villages and beautiful islands which was incredibly rewarding.  The people were warm and welcoming, with a peacefulness about their lives.  Being a mix of primarily co-existing Muslim and Christian faiths, one would usually expect some tension.  Its true that in the past this has been the case, but from our observation, they were truely accepting of the differences and live harmoniously, often with a Mosque and a Church side by side in the same village. The islands were beautiful, ranging from larger more inhabited and developed landforms covered in lush jungle accessible by road, boat and small airports, through to the thousands of tiny islands, mostly uninhabited, that made up the stunning area of Raja Ampat. Some of these Robinson Crusoe islands were eye wateringly beautiful with the quintessential palm fringed white sand beach and not a soul to be seen. If I’d seen a sign with a smiling real estate agent offering a sale and purchase agreement for one of these islands I’d still be there now building a wee hut and catching fish from my canoe.

The smaller seaside villages sustained themselves by growing vegetables and coconuts, but the primary focus was for them, was fishing.  The shores were always lined with multi-coloured jukung (outrigger canoes) either paddled or sailed out into the fish-rich seas around the island.  Drying small fish was prominent in most places and the smell was unmistakeable! Spear fishing and nets were also used extensively in the ocean harvest.  In the larger villages the early morning fish markets were colourful and rowdy as deals were struck.  We participated occasionally (much to the delight and significant amusement of the locals) and the fish were always fresh and delicious.  The people were always incredibly warm in their welcome and enjoyed chatting (where possible) and laughing with (at?) us.

Into the hills we found cooler and lush tropical rain forests abundant with cocoa, rice, banana and cassava growing in the rich volcanic soils.  One of the islands we visited had large cashew nut plantations and I discovered the hard way that trying to open a raw cashew with ones teeth was somewhat foolhardy given that the nut outer contains urushiol, a chemical found in Poison Ivy and is not on the recommended eating list!  Life in the small mountain villages here had a slower and more peaceful pace; but again we were met with smiling faces and cries of Selamat pagi! (good morning).

Many of the villages in this area still enjoy a traditional way of life with the women chewing on betel nut, colouring their mouths and lips bright red. We were told (as we tried it – yuck) that it would “make your teeth strong”. Odd; most of the pro’s had lost a significant number of their choppers years ago! Weaving cloth from the cotton-like fluff obtained from the Kapok tree was prominent in some areas; a laborious and time consuming venture, often taking months to finish one elaborate hand spun, dyed and woven piece.

As we travelled further east into the The Maluka’s we were immersed in history of the Spice Islands where the tantalising scent of nutmeg, mace and cloves that were originally and exclusively found there, still hang in the air. We could see how the presence of these valuable spices sparked significant colonial interest from Europe in the 16th century.  The legacy the European traders left behind means the region is steeped in history and of course, evidence of the wealth and the bloody battles that took place to control the spice trade.  The islands are now known for their volcanoes and palm-lined beaches and the southern Banda Islands (were we spent our time) are still covered in nutmeg trees and include the active volcano Gunung Api. Colonial buildings like the Dutch East India Company’s Fort Belgica hint at the islands’ past as a center of the spice trade.  The villages were beautiful with multi-coloured well built houses; evidence that the locals were proud of their homes and their islands.

For centuries, the islands of Banda Neira, Lonthor, Ai and most importantly, Run were a blip on the radar of Europeans, as the source of fabled spices, at the time worth more than gold. Arab traders kept the location of these expensive commodities a well-guarded secret. Europeans were willing to pay a fortune for these spices, which were used in various processes, from the preservation of foods, improving gentlemen’s ‘longevity’ and even for warding off the plague, all reasons why the spices were so highly valued. Once the Portuguese ‘found’ the Banda Islands as the source of nutmeg, this small group of islands quickly became one of the most valuable properties in the world. Wars were fought and atrocities carried out by several European nations for control of this tiny archipelago. With occupation in succession by the Portuguese, English, and Dutch over a period of several hundred years, many important world events occurred here that affected the course of international history. For a group of very small and sparsely populated islands, the Banda archipelago played an outsized role in the history of western civilization, and had an impact far larger than their modest size would suggest.

While on Banda we climbed the active volcano, Gunung Api.  While the entire volcano rises 5 km from the sea floor; the volcano itself is a 2000 foot climb above sea level. The slopes of Gunung Api are steep, and I mean bloody steep.  It took us nearly 2 solid hours of climbing up the lava covered path, a little like walking on ball bearings – one step forward, two backwards.  The views from the top were spectacular and the cone was impressive.  The walk back down was even more challenging.  I have no idea how we got down on shaky legs without any significant material damage. In 35 degree heat and 98% humidity the ocean never looked so good. 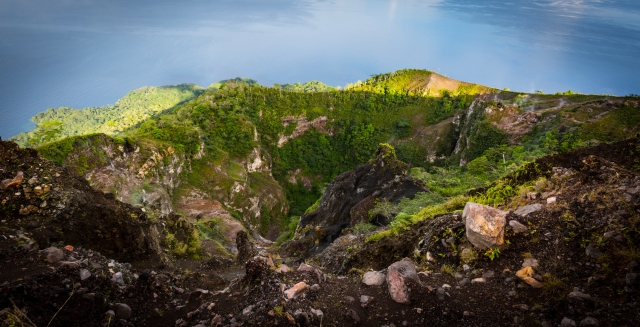 We were on the island of Run for their 350 year anniversary that celebrated the deal done in 1667 when the Dutch and the English signed the Treaty of Breda. Back in the 17th century, when nutmeg was such a valuable trading property, England and The Netherlands were literally at war with each other to be the sole conqueror of Run Island.  The little island, produced the most nutmeg among the islands in Banda.  Under the Treaty of Breda, the Dutch secured a worldwide monopoly on nutmeg, by offering the island of Manhattan in return for England’s giving up claim on Run island.  Interesting deal….  But regardless, the costumes and enthusiastic dancing certainly did the occasion justice.

As we set sail from Banda for Misool in southern Raja Ampat, we were challenged to a race from the habour by a traditional war canoe native to the Maluku region is called a Kora Kora, a long and narrow wooden vessel that requires up to 40 rowers to manoeuvre.  It was an impressive sight to witness this traditional vessels in Banda harbour, filled with local men chanting in unison as they raced across the bay.  Kora Kora 1 : Amandira 0.

After yet another long overnight passage, we woke the next morning in southern Raja Ampat to the incredible beauty of thousands of small islands and beautiful beaches. Water bound villages on stilts were abundant with a focus on pearl farming supporting the region economically. The islands were been pushed up out of the oceans centuries ago building incredible rock formations and leaving behind gothic like caves hidden amongst the islands. Caves with human remains can still be found high up in the cliffs and inland salt water lakes filled with thousands of jellyfish make for a spooky swimming experience! Misool is a stunning part of Indonesia and now I’ll need to go back and explore the area more!

Enough for now, I will tell you all about the amazing diving and more about these beautiful islands in a couple of weeks. Selamat tinggal for the moment.

← Holy mother of God…
Spice Islands Expedition Part 2; The Oceans and The Islands →

6 Comments on “Spice Islands Expedition Part 1; Life and The People”